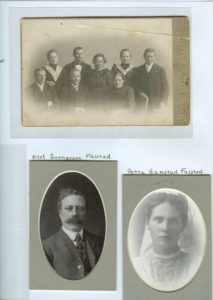 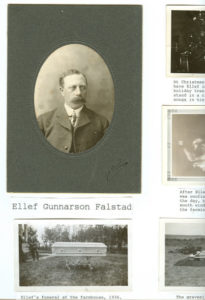 Ellef Gunnarson Falstad was born in Ekne near Trondheim, Norway in 1867. In 1892 he came to LaCrosse, Wisconsin, at the age off 25. In 1894 he came to the Valley City area and worked as a laborer for the late Martin Skonnard. In 1900 he decided to start farming on his own and acquired a quarter of land in Section 1 of Skandia Township. Here he farmed and batched for a few years.
In 1906 Ellef was married to Petra Hamstad at Warren, Minnesota. Petra was born in Mosviken near Trondheim, Norway, in 1885. She came to the United States and the Valley City area in 1903, and worked as a maid in the area. When they were married, they lived on the Critchfield farm in Section 6 of Nelson Township. While they lived on the Critchfield farm, Signe, (Mrs. Henry Jacobson, Perley, Minnesota); Ingram (Valley City, North Dakota) and Birger (Valley City, North Dakota) were born. In 1910 they moved 414 miles south to another farm in Section 25 of Skandia Township. Children born while here were: Mildred, Ruth, Ellanor (Mrs. Morris Holeton of Rockford, Illinois), Synove (Mrs. Paul Pedersen, Valley City, North Dakota), Bergit (Mrs. James Laudon, Fargo, North Dakota) and Erling (Ephrata, Washington).
In 1921 Ellef suffered a stroke and remained an invalid until his death in 1936. Mrs. Falstad, together with her sons, continued to farm until 1961. At that time Synove and Paul acquired the farm. The Falstad farm is now owned by Bertel and Dianne Pedersen, a son of Synove and Paul Pedersen, a grandson of Ellef and Petra.
Ellef and Petra were active in church activities. As a young man, Ellef took part in building Ringsaker Church in 1898. He was also active in township and school offices. Ellef and Petra enjoyed reading and spent winter evenings reading with their family. The Skandinaven, a Norwegian newspaper, came regularly and was their source of getting the news. The newspaper contained a regular comic strip of “Ole and Per”, similar to the Blondie and Dagwood series of today. During the time that Ellef was farming in Skandia, he was on the board of directors for the Farmers Mercantile store in Hastings.
Christmas was always a festive time in the Falstad home. On Christmas Eve, as in Norway, the first revealing of the Yuletide tree took place. The tree was brought into the home, decorated, and placed in the center of the living room. After the traditional Christmas Eve dinner of lutefisk, lefse, and rumagrout; the family joined hands and sang in Norwegian Christmas carols around the decorated tree. Mr. Falstad, then an invalid, would be brought to the living room to enjoy the activities. It was a long time custom of Norway to also bring in the sawhorse on Christmas Eve and any member of the family who was not wearing a new piece of clothing must “ride the sawbooke”. Other relations would come to the home to enjoy the season with the Falstads, among those Uncle Adolf and Olof Hamstad, bachelor brothers of Petra, were always present at the table.