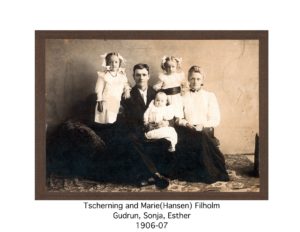 Tscherning Filholm was born in Vrensted, Denmark in 1879. He was the oldest of ten children and was christened, Christian Fredrick Tscherning Andersen, the family name which was later changed to Filholm, the name of the farm on which they lived.
His father, Andrew Paul ‎(Andersen)‎Filholm, had spend 1 1/2 year in America and wanted badly to bring his family, but his mother ‎(wife)‎, Christina, did`t feel she could move such a big family so far. Andrew urged Tscherning to come to the land ofopportunity.
After Tscherning had served in the King`s Guards, where he met and married Marie Hansen, who worked in the Royal Household, he came to America, arriving in Busnel, S.D. on June 6,1904.He was told that on his arrivel in Busnel he should look west to see a big wooden windmill. That windmill was on the Jens Hortness farm and that was where a job was waiting for him. He walked the four miles to the farm.In september of that same year his wife joined him, bringing with her their two daughters, Gudrun, age two and Sonja, age 4 1/2 months.
His wife went to work for Jens Hortness`s son, Nels, who had just lost his wife leaving him with an infant son, Alfred.On August 1, 1905 Tscherning and Marie had a son whom they christened, Nels, but he only lived until October 16, 1905. Later another daughter, Esther was born.They later went to work for Ross Madsen and then worked on the Henry Moore farm for seven years before they bought Mr. Moore out and began farming on their own. In 1929 they moved the family into White, S.D..
Tscherning was very active in the affairs of the community. He and his family were members of the Argo Danish Lutheran Church, now Pioneer Lutheran, where he served on an Alderman on the White City board.Tscherning and Marie passed away three months apart in 1938 and now lay at rest with their infant son in the cemetary of Pioneer Lutheran Church, northwest of White, S.D..Gudrun married Henry Friday of White in 1921 and they farmed around White until the 1930`s when they moved to Lake Chrystal, Minnesota.
They have two daughters and a son.Dorothy married Donald Jacques of Kansas and they live on the home farm at Lake Chrystal. She has three children. Julienne teaches school in Forest City, Iowa. Vallace is in the insurense business in Mankato, Minnesota. He married Mona Evans of Mankato.Gudrun and Henry retired into Lake Chrystal many years ago and they recently observed their 61st wedding anniversery.
Sonja married Jens Jensen, a native of Vraa, Denmark in 1925 at Watertown, S.D.. They have always lived on farms in Brookings County. They raised four sons.Russell married Elaine Norris of Brookings and they raised four children. Janies with the IRA in Aberdeen; Judy married William Baldridge from Colorado. He is a serviceman stationated at the Ellsworth Air Base near Rapid City. They hav three children: Gary married Bonnie Degreat of Woodstock, Minesota. He works at Arts Feed Locker in Brookings and Bonnie teaches Special Education in Esteline. Stewe is Ass`t Produce Manager in Hyvoe in Brookings.
Wendell married Maureen Ponte, daughter of F.W. and Florence Ponte. They farmed and raised five children. David is a captain in the air force in Indiana; Dale married Debbie Thompson and lives on a farm near his mother; Pattie is s secretary at S.D.S.U.; Wendy and Amy are in school in Brookings. Wendell presently lives in Brookings and works at the Great Plains Lumber Company.Cliford teaches school in Jasper, S.D..Curtis married Lou Ann Davis, daughter of Wilber and Adele Davis. Curtis is the Chief of the Brookings fire department. They have four children. Kristine is a surgical photographer at the University Hospital in San Fransisco; Randy is an upholsterer in a van factory in Phoenix, Arizona; Robert graduated from high school in 1982 and presently works for the city of Brookings; Michael is a freshman at Brookings high school.Sonja resides on the farm south of Brookings.
Jens passed away on Memorial Day 1980 and lay at rest in the Greenwood Cemetary in Brookings.Esther married Ralph Quineey a native of Kansas. They farmed in Brookings County and raised an adopted son, Donald, who has two children and lives at Trosky, Minnesota. Ralph died Oct.2, 1972 and Esther died Apr. 25, 1979. They rest in the Fairview Cemetary at White, S.D..

Of the ten children in the Filholm family only two, Tscherning and his brother George came to America.